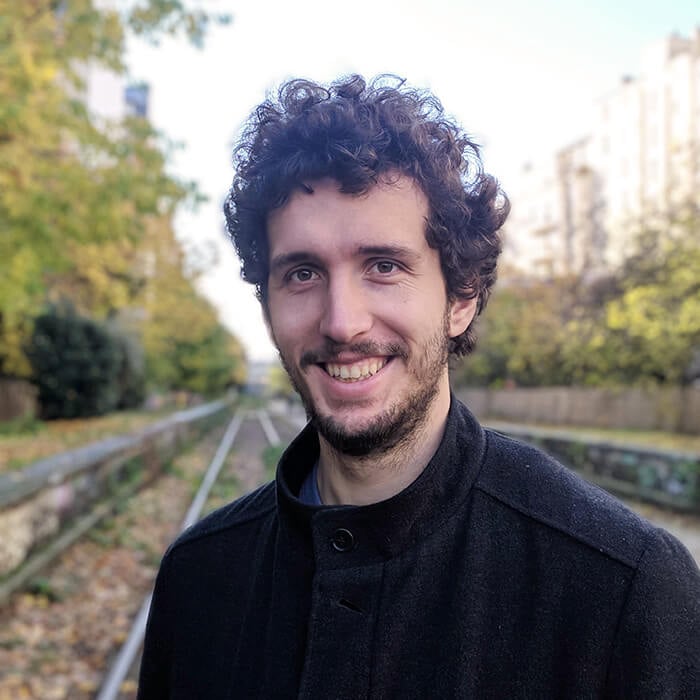 Launched in 2013, Docker represents a real shift in Software Development. Its mantra: « Build Once, Run Anywhere ». Add a Dockerfile to your app and it becomes a package, a container, that you can ship seemingly anywhere, as long as you have Docker installed. Along with other technologies such as Kubernetes, it enabled the revolution of Cloud Computing, with stateless applications that can rescale on-demand and be deployed automatically through CI/CD.

So, is the case closed? Will we no longer need to think where our application will run anymore? Well, that's not that simple, a whole part of the world is ignored: IoT, smartphones, and all these small gadgets don't run on the same hardware as our laptops and computers.

You might think it's not that much of an issue: websites and other services tend to run on classic Linux servers. However, there are many situations where using a bulky server is not an option :

Of course, many IoT platforms don’t have the resources to run containers, but there are real use cases where you have a powerful enough machine to run Docker, but still small enough to fit in your pocket, and energy-efficient. That's the case of the Raspberry Pi, a very small computer, used in many IoT and home-server projects. That's the platform we'll use for this post.

Let's remind the issue: Docker has been made for your everyday computer, which is an x86-64 CPU (more about that in a few paragraphs), but not for small elements of IoT such as the Raspberry Pi which runs on an ARM CPU.

Let's say you want to deploy your great Python application with docker. To keep things simple we'll create a simple Python app that just tells the date and time, using an external API (what an amazing SAAS concept). That's probably not very useful, but enough as an example for this post. Anyway, let's call it pytime!

If you don't see any code below, be sure to load the full version of the website, not the AMP !

That's all! We only use one dependency: requests which is used for the API call.

Now let's create a simple Dockerfile for it. We'll use the build caching system, installing dependencies first and then adding the source code.

Now, on your computer, you can build and push the app with docker. I assume you're already logged to your docker repository (if not, simply docker login for the default  DockerHub).

It would be better to deploy it on a proper infrastructure such as Kubernetes, using Helm charts for deployments, but let's keep it simple. Let's say we ssh into our server and run the app directly with Docker.

However, here, our server is a Raspberry Pi v4, which runs on an ARM CPU (more on that later).

Well, that didn't go well... On your computer or a classic server you shouldn't encounter any issues, however on an ARM processor, for example on a Raspberry Pi, you will encounter a strange error message.

The error is not very explicit, but with some research, you'll understand that the instructions in the Docker image are just not supported by the ARM machine. That would be the case for many IoT projects. That's not what I was expecting for such a simple application. Does Docker lie when it proclaims "Build Once, Run Anywhere!"? Well, it is a bit more complicated, let's dive in.

Before reviewing some Docker features, it is important to understand CPU architectures, also named instruction sets.

CPU can be classified into different categories, depending on how they are designed internally, and therefore how they communicate with the software. Your everyday computer or the server which serves this article will either run on an Intel or AMD CPU, the market leaders, which both use the same language with the computer: x86. However, a smartphone or a small IoT object, which needs to be power-efficient, will use smaller CPUs, which use a different instruction set, such as ARM or RISC-V.

This language is an abstraction of the physical CPU for the software. This very low-level computer language is the bridge between our high-level human code (a = a + 1) and what happens in reality: fetch the value in a from memory, add 1, save the new value in the a variable's memory address. For example, here is a translation for a C source code to Assembler for x86, which is very close to the actual instruction set language.

Transforming the intelligible code into Assembler is the compilation. For Docker, the analogy will be the build step. In the preceding example, we've built an app for the x86-64 architecture (the 64 bits flavor of x86, also called amd64), and we have tried to run it on an ARM CPU, it just cannot function properly!

But are we stuck with using Docker only on big and consuming x86 CPUs, letting behind a part of the IoT ecosystem? Luckily Docker handles multiple architectures natively.

On the ARM server (the Raspberry Pi), Docker seems to work fine.

In fact, if we had used the command docker build on this ARM machine, it would have created an image for this specific CPU architecture. The issue here is that we've created an x86-64 image and tried to use it on an ARM machine. It just cannot work. 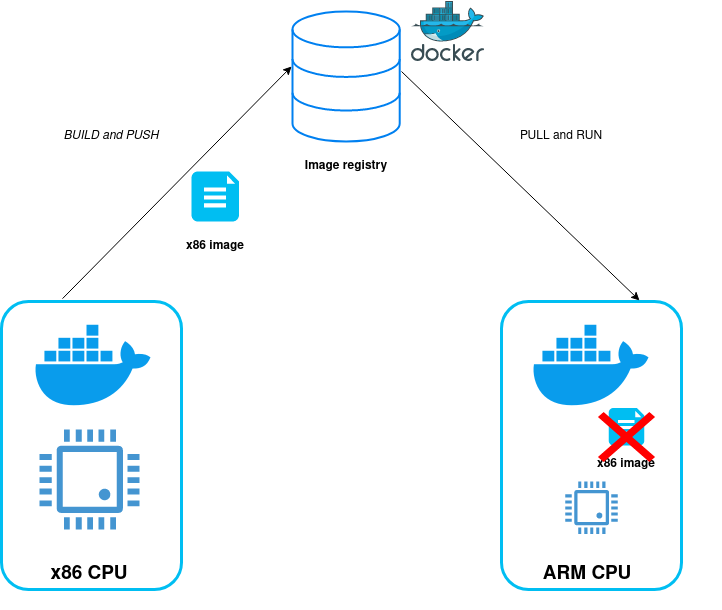 By default, Docker build and pull the image for the platform it is running on. On DockerHub, you can explore which platforms are available for which version of the image. For example for  python:3.8.2:

Even better, since the previous solution pins the image version in time, disabling security fixes, you can specify the architecture with a prefix. For example:

These solutions, either the automatic platform detection or the manual selection allows us to avoid relying on a complex tagging system such as myapp:1.3.2-arm.

Here we have a solution. Let's just build the app directly on the ARM server. Indeed, it will run correctly on the specific CPU. But we have new issues:

We want to be able to build our app once, on our machine or a CI/CD solution and forget about the hardware it will run on! Luckily, Docker has also a solution for us.

Now you should be able to run

Here we can see that our current docker builder is able to construct images two different architectures:

With buildx you could compile a 32-bit version of your docker image for an old computer! And it can also works for our exotic ARM CPU.

However, we will need yet another tool for this: qemu, a cross-compilation framework. Cross-compilation is compiling software for an architecture B on a computer running on architecture A. For example, compiling for ARM on an amd64 platform. That's exactly what we want! Using complicated Linux functionalities which I won't explain here (if you're interested, read this article), we can give buildx some qemu steroids!

It will only work for the current session. If you reboot you'll have to run this command again.

Now let's create a new builder with buildx, which will be able to use qemu abilities.

Now let's display the available platforms I can build on. We need to bootstrap the builder, i.e. initialize it.

We have many more platforms available. If you check on DockerHub, you'll see that there is no base image for riscv64, we'll have to remove it from the list. To speed up the process, we'll only build for x86 and ARM here

Then the CLI is the same as docker build, with the addition of the --platform argument which takes the list of the platforms you want to build to. You can also specify --push to directly release your image on a registry (be sure you're logged in!). Here I'll push my images into DockerHub.

If everything goes alright, you should be able to see all your images on the DockerHub.

Now on the Raspberry Pi into which we can ssh, we can successfully run the app:

If your app is quite big, or use some modules such as cryptography in Python, you'll notice that the build can be quite long (from 30 sec to 15 min!). That's a common issue with cross-compilation. But it still often better than building directly on the target device. Indeed, the IoT objects and small computers don’t have many resources to build an app or a docker image efficiently.

That's fine and all but I feel we’re missing something... Having to build and release the app from his own computer shouldn't be the norm, and I would bet that Windows users are currently struggling to follow this tutorial.

Let's move all this logic into the cloud, with a CI/CD workflow!

For this example, we choose Github Actions because it's very simple to use and share, but you could adapt this tutorial into any CI/CD solutions such as GitlabCI, Travis, CircleCI or Jenkins. If you don't know anything about GitHub Actions, check our article about it!

The main idea around Github Actions is to create reusable components and share them. There is an amazing action Buildx action which exactly fits our needs: it creates a builder, with qemu already configured.

Then we can add some steps for the build, DockerHub login, and finally the release of the app. The file is stored in .github/workflows and we are good to go!

We can check if our action was successful:

Now our application is automatically available on all these platforms. Be sure to check if the base image (here python3.8.2) for the target platform does exist on DockerHub as shown above.

If you were attentive enough, you might have noticed that we don't build Windows images, which does exist sometimes on DockerHub. Luckily, since a few patches, Windows embarks a Linux core and therefore supports Linux containers. Anyway, Windows is seldom the build target, except for some specific .NET applications. We’ve got an article about using Docker on Windows.

Not that we could also have used multiple runners, each running on different hardware, and therefore we would have avoided cross-compilation. However, it requires much more effort in terms of infrastructure.

In this article, we demonstrated how Docker is able to build applications for several CPU architectures, which is essential for the support of the growing IoT ecosystem. While still experimental, Docker Buildx is a game-changer for delivering containers to multiple platforms, and already easily integrable in our CI/CD process.

All the code, including the CI/CD process, is available in this Github repository!