On this date, Amazon Web Services (AWS) includes 165 services. Some are essential, some are used marginally.

Depending on whether you use AWS to host your website on a virtual server, to store your static files or to build a Kubernetes cluster, you will use a different panel of services.

However, there is a service you will have to deal with no matter the context: Identity Access Management or IAM for short.

Rôle, resource, policy, principal…When you are confronted with IAM for the first time, it is not exactly easy to cope with all these new denominations and concepts.

Do you have 5 minutes to spare? We’ll help find your way in IAM.

AWS Identity and Access Management (IAM), as its name suggests, is the AWS service that deals with identity and authorization.

Whenever you try to achieve any action on AWS, you have to go through IAM which will identify you and then allow or deny the action depending on the rights that have been granted to you by your account administrator.

If you use AWS, you use IAM, whether you’re aware of it or not.

For example, when you connect to the AWS web console, it is IAM that checks your login and password and allow you to access your account. Then, when you try to create a new EC2 instance, it is still IAM that checks that the rights needed to carry this action have been granted to you by your account administrator.

The same goes for an application trying to access a resource hosted on AWS: IAM will identity the application thanks to the access key provided and will check that the action is indeed authorized.

An account can be seen as an environment owned by an organization, a team or an individual.

The words 'account' and 'user' can often be used as synonyms in a conversation. Let's not make that mistake when talking about AWS since those two words mean two different things. If you tend to mistake your username for your account ID, remember that the latter is a 12 digits number whereas a username could be any character string.

A user is an AWS entity associated with an individual or with an application. A user has identification information in the form of a username and password pair or an access key. It is possible to organize users in groups in order to facilitate authorization management.

When created, an account is populated with a single user: the root. This user should create other users as its organization grows. It is crucial to understand that this root account should not be used for day-to-day operations. Use it to create users and give those users the permissions they need. 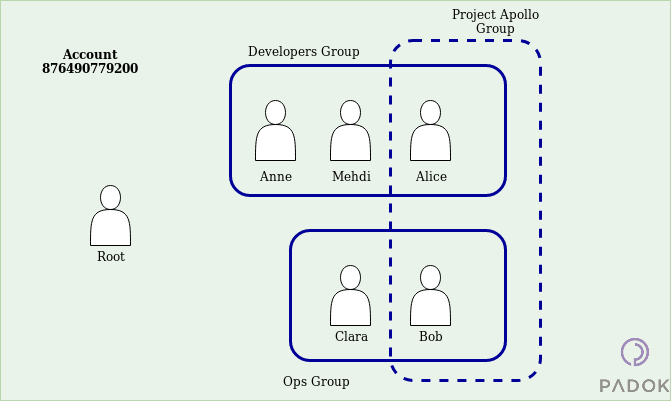 There is also another concept that could easily be compared with a user: the role. We will see what the role is all about in the third part of this article so we can introduce a few more concepts that we will need to understand it more easily.

Each AWS action , whether it originates from the web console, the CLI AWS tool or from some piece of software creates a request sent to AWS . The IAM service will compare that request with the list of permissions - the policies – defined by the account administrator to determine whether or not the action is allowed. The three main fields specified in a request are the principal, the action and the resource .

Pretty much anything that exists on AWS is a resource. An EC2 instance is a resource, as well as a role or the RDS service.


NB: You may have noticed that the formats of those identifiers are not exactly the same:

Keep in mind that ARNs (Amazon Resource Names) are created to identify a resource in a unique way while being as short as possible.

A policy is a rule controlling a user, a group or a role access to a resource.

Standards policies are directly available but it possible to create other policies to answer a specific need.

Similarly to the request, the policy defines the Action and Resource fields and add an Effect field that indicated whether the action should be allowed or denied.

Here is an example of a policy in JSON format.

This policy allows any EC2 action. It is also possible to encounter policies specifying a Principal field instead of a Resource field when talking about a trusted relationship

This example allows Amazon Directory Service to assign this role to its users. It would also be possible to allow users from another AWS account to use this role with a similar trust relationship. We will see an example of those in the third part of this article. 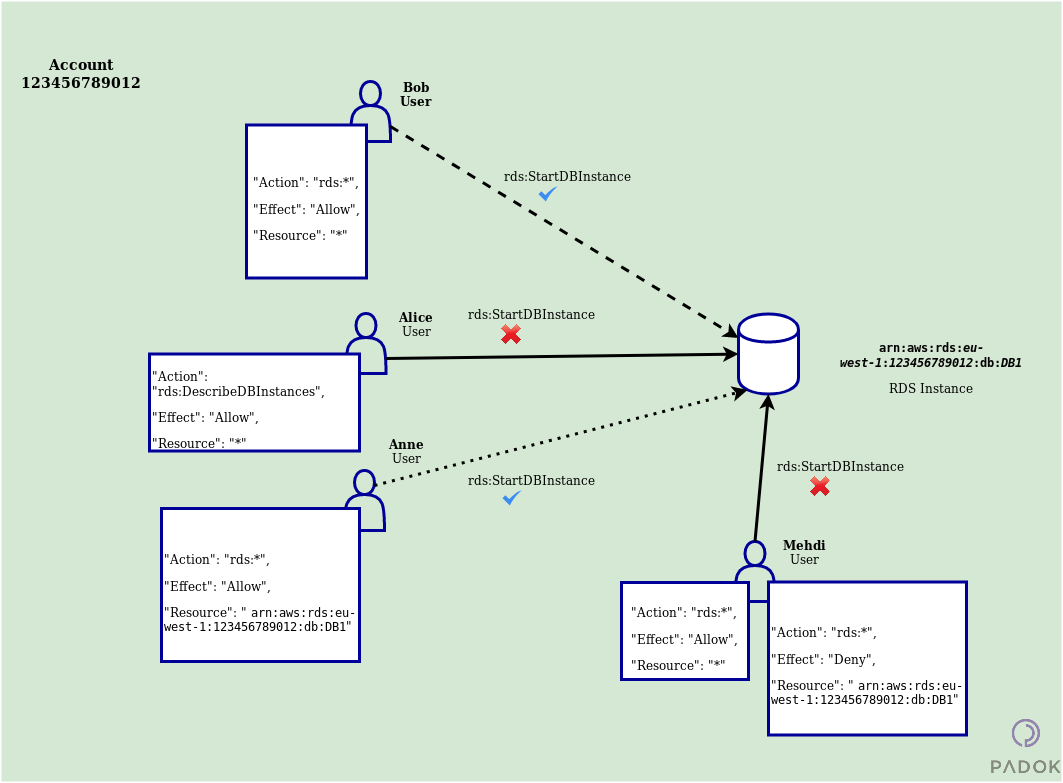 Figure 2: Diagram illustrating the use of strategies

On the diagram above:

A role is an AWS entity that can be compared to a user. However, a role is usually not associated with an individual or a precise application. Many users are usually given the right to assume a role (i.e. use temporarily the rights associated with a role). A role, contrarily to a user does not have a password and uses temporary identification information.

A role could be used to allow users from a different account to act on resources on the role’s account.

It is this practical case that we will try to illustrate with the following two diagrams.

First, let's detail the result of the different requests executed directly from the user to the resource without using a role: 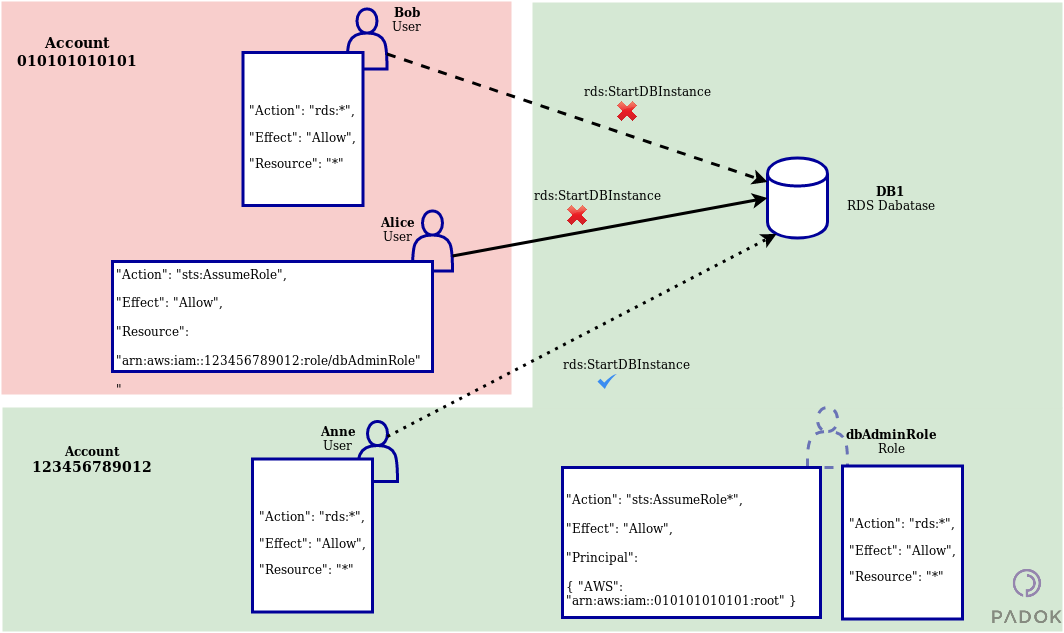 Important: It is necessary to assume a role to act on a resource on a different account.

Now let's see what happens when users use the role to access the resource:

IAM is a crucial part of AWS and, as a user, you will be confronted with it whether you want it or not.

It is generally not part of AWS that people like to spend their time on. It is often seen as the bad cop that doesn’t let you live fully your experience in the virtually unlimited word that is the cloud.

However, spending some time to understand the mechanics behind the curtain of IAM helps you avoid moments of profound desperation in front of a “403: FORBIDDEN” message on your console.

So my advice to you is to get comfortable with the basic concepts explained here; your future self will thank you.

Camil is a Site Reliability Engineer (SRE) at Padok. He shares with our clients his expertise in DevOps Technologies, such as Kubernetes, Helm, AWS, and Gitlab